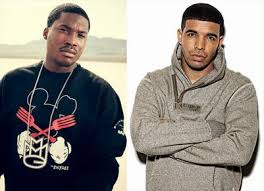 So we all know about this rap beef between Meek Mill and Drake, although its not clear what started the actual beef. According to what I have been reading, Meek Mill feel a type of way over Drake not tweeting or promoting Meek's new album which Drake has a feature on. So Meek is bothered and went on a two day twitter rant about Drake not writing his own rhymes, Safaree being gay and a whole lot of sh*t I guess he had to get it off his chest. On one hand I'm like let Meek have is moment, maybe his album sales a'int doing what they expected, stress you know, but question, why you gotta attack Safaree he let you be when you stole his girl, why talk shit about him, he is living his Nicki free life. Then I noticed Lil Boosie weighing in on Drake side calling Meek a snitch and all that sh*t, Boosie what this have to do with you, why are you the Drake protector, you must be waiting for him to do a feature with you. First I don't think Meek Mill is a snitch and he prolly realer than you Boosie, see it takes courage to speak out against the masses and stand on your beliefs. The rap game was started on the premise of talent, talent to create these stories of your own words to conveyed a message, so if you have people writing for you then where is the talent? Would it be okay for Lebron James to get somebody to make the shots for him? No so why is faking talent and mediocrity acceptable in the rap game? There are hundreds of thousands of rappers I know that write and grind everyday, it is not fair for Drake to be on top if he is not writing is own material, so Lil Boosie (I luv your music) but stand up for talent and fairness, not d**k ride. my thoughts. Peace.
Posted by Queen at 5:46 AM