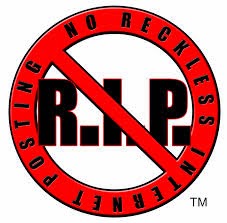 No Reckless internet Posting (No R.I.P) a new anti bullying movement created from a tragic event and designed to inspire and evoke change. What is No R.I.P? it is a pledge to not provoke others via social networks and to be Conscious of your words. Although in reality words cannot of physical hurt someone, however in this same reality they can. Being reckless is not being conscious of the damaging effect the words you put out in the universe about someone can have, these words can be a devastating and sometimes cause a fatal outcome.

The No Reckless Internet Posting campaign is to bring awareness and make those who maliciously say things about others in social media or any other mass media forms to stop, consider  and examine how their words can effect others and if their information is factual or  gossip. Some media personnel such as Funky Dineva who recently appeared on the ER a show on Be100 radio, may look at the No RIP campaign as a policing of the blog world, which currently does not have any set guidelines as to what they can post, simply because it is implied that the blog post is the opinion on the blogger.  As a fellow blogger I can understand his point, however being that in real life we probably would not voice opinions that are harsh and judging to someone’s face then why do that in a blog post. During his  interview on the show In The ER on be100 radio, Funky Dineva expressed that the “No R.I.P had to be defined”  and that he believed that the movement was designed to come for his job as a blogger, I imagine that a lot of other bloggers out their felt the same way hence why the interview took place and why this blog is being written.

According to the definition that Debra Antney and Simone Slaughter gave it was to make people accountable and responsible for the things that they report on others to make them aware and  put themselves in their shoes or the ones of their family members. In other words be more human and caring and less inhuman and money hungry. As the interview goes on Funky Dineva continues to express his thoughts on the No R.I.P movement saying “people sometimes do things for convenience” in my opinion he was implying that Debra Antney was doing the movement for a fictitious reason. Now this point I can’t understand at all, seriously at what point do people really step out of reality, because the reality is that Debra Antney lost her son partially due to  the things that were posted on the internet.  This is common knowledge to many especially a blogger so to imply that NO R.I.P is convenience is totally delusional.  In my opinion this Movement was due to happen, in today’s  society we have teens harassing stalking others to the point of suicide, murder and mass murders occurring frequently, this is real life this movement was destined to happen and thanks to Debra Antney is has taken flight. The no bullying movement was very successful but as we know with new technologies developing every minute bullying was on the way to being digital. Weigh in let me know what you think about this movement.