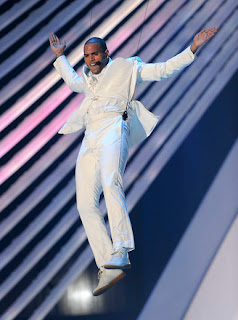 As usual Chris Browns performance last night was one of the best at the MTV VMA's he soared through the arena like effortlessly and stayed on point as he was in the air hitting all of his dance moves. If you ever doubted him before please be advised he will shatter all haters doubts with his raw talent. I have always been a real person and gave credit were it is due and Chris Brown is the real thing. 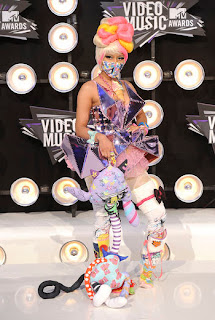 Nikki Nikki Nikki what the hell are you wearing? But to keep it 100 she look better than most of her other outfits that she wore previously. Anyway to put rumors to bed she was still with SB her boyfriend hype man  as he joined her on stage when she accepted her award. 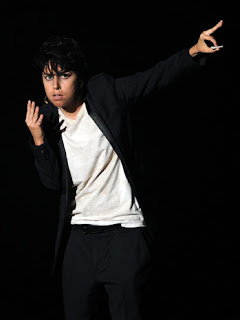 Another highlight at the VMA's was Lady GAGA, yes this is Lady GAGA as her male alter ego and I must keep it real again she played the hell out that role. IDK I think she has a real promising future in acting, she stayed in character and confused the hell out out of a lot of people.
Posted by Queen Neeka at 6:02 AM