***UPDATE***
Okay so remember the original post I did on the former IMF Chief Dominique Strauss Kahn and how he was arrested for supposedly forcing his self on a maid (read below article to refresh) So anyway; I for one did not believe this is in the first place the above picture is his accuser who happens to be an African Immigrant ( your making us look bad chic) come to find out she has a man in prison whom she called and told that she was trying to get some money out of this whole situation (why don't people understand that prison calls are taped ) besides that the prosecutors are finding allot of problems with her story.  Since the case is falling apart Straus Khan has regained some of his freedom to travel within the US borders only. IDK this chic better get her story straight cause causing a big ruckus like this will get her ass deported.
Now new reports from a young lady in France says that Strauss Kahn tried to rape her 8 years ago, although at this time they will not link the two cases together, he has to face separate charges in France. My prediction is if te NY case falls apart they will use this new accusation to make the case stronger. IDK this man seems to be in allot of hot water with these women. ( it will be interesting to hear what his wife truly thinks)
Dirty Old Men are Losing.. Maids and Interns are winning... 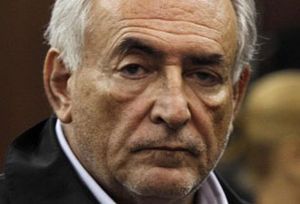 Lets see where to begin the conspiracy ultimate setup of the century, the chief of the International Monetary Fund (IMF) Dominique Strauss Kahn was accused this week of attempting to rape an African Housekeeper, according to reports he forced  his self on her trying to rip of her clothing and forcibly making her perform oral sex or attempted to he was in Manhattan on business. Okay so he has been sitting in Rykers Island all week and was denied bail until yesterday the judge decided to grant him bail under certain conditions, (people red these condition this is ridiculous) he has to post 1mil in bail and 5mil as a security he has to remain in the Us until the matter is sorted out and has to maintain 24 hour surveillance. WTF well he was in charge of the monetary fund so this should be chump change for him. His devoted wife originally found an apartment for him to live in while here, but according to reports another tenant in the apartment building did not like the idea and requested that he not move in, Dominique wife is now scrambling to find an apartment so he can be released. This ish sound mad suspect in my opinion, this may cause some international tension with France and I can bet this whole thing has some political undertone. Leave a comment and let me know your opinion on the whole thing..
Posted by Queen Neeka at 8:13 AM