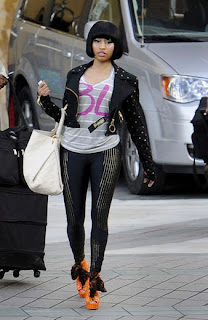 I still don't like her style I really think you can do better Nikki, anyway she was spotted outside of her hotel in Miami, apparently she is there to do a show opening for Britney Spears. Nikki recently came to Atlanta to do a show and party at the Velvet Room which left her fans a little disgruntled with her, apparently she showed up to the club surrounded by body guards and has requested no photos of her there ( for obvious reasons, rumors of her romantic troubles) so she came to the club went to VIP surrounded by her guards and left after 15 minutes.
Okay I have to sound off why are all these artist coming to Atlanta to do shows and giving half a** shows, Mary J Blidge back in the day ( she even had to come back to make up for it) Lauren Hill recently ( she also had to come back to make up for it ) Rihanna came and acted like Atl was the worst place on earth ( she left immediately after her show and declined to host a club event) I'm just saying this is becoming to be a trend, just to let all you celebs know that Atl is not your garbage dump where you think its OK to give up this Bull Sh**. 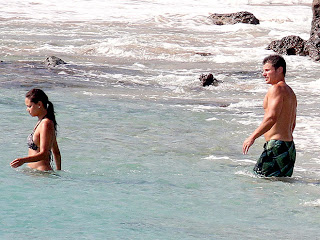 Nikk Lachey and his new wife Vanessa celebrating their union in a getaway to St. Barts. Congratulations to the newlyweds!!
Posted by Queen Neeka at 6:05 PM