Teens out on a joyride slams into a house in Dekalb County GA early Friday morning, police have apprehended the 14 year old driver. Question where are the parents during this whole incident, your kids missing from the house and you don't know. (SMH)
SHOOTING IN INDIANA SCHOOL 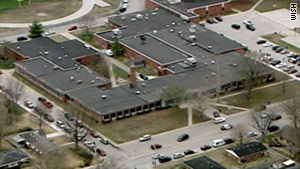 Martinsville Indiana one teen shot after a former student, who authorities say was not suppose to be on the property opened fire. The injured teen was airlifted to the hospital, his condition remain unknown, both students were not identified.
Posted by Queen Neeka at 2:41 PM

Email ThisBlogThis!Share to TwitterShare to FacebookShare to Pinterest
Labels: Potos from CNN and WSB