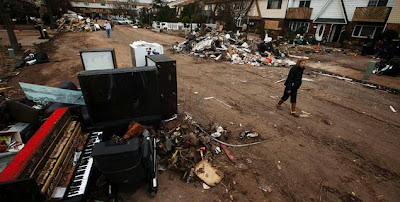 So even a few million starving and homeless people weren't enough to stop Mayor Bloomberg from deciding to continue the annual New York  marathon as scheduled.  It wasn't until the Mayors office was given the devastating facts about the other parts of their fair city that he was politically and reasonably convinced to call off the affair.  Certainly he was more concerned with whether or not rescue workers were using 32oz bottle to refuel citizens.

For the news updates go to www.blackboynews.blogspot.com
Posted by Queen Neeka at 8:43 AM

Email ThisBlogThis!Share to TwitterShare to FacebookShare to Pinterest
Labels: Article by James Calvin, Photo from Google